Origin and Macroevolutionary Consequences of microRNA 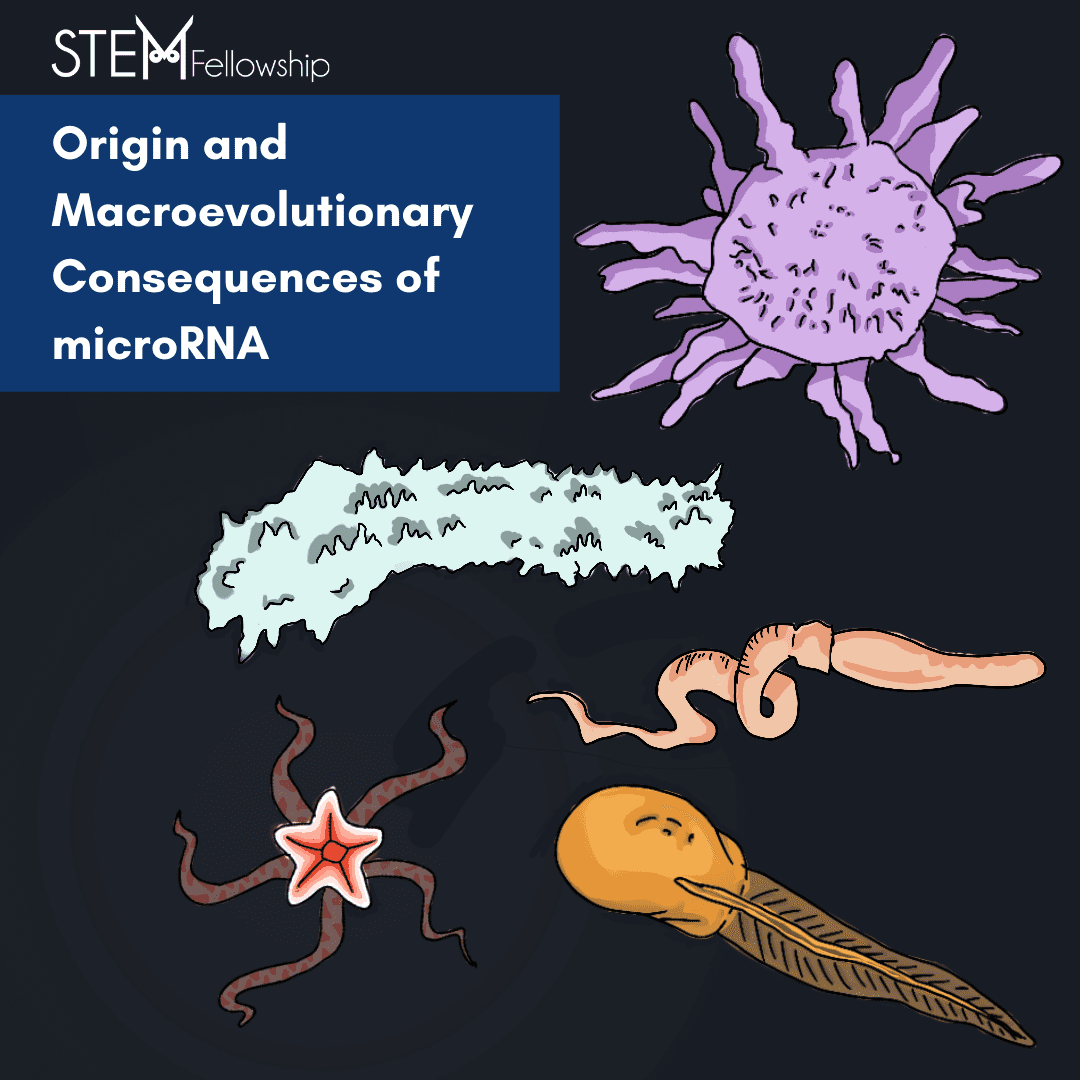 MicroRNAs are short strands of non-coding RNA that undergo Watson-Crick base pair binding to the 3′ UTR of mRNA transcripts resulting in translation termination or mRNA degradation [1,2]. Among many others, miRNAs have an important role in cellular development, differentiation, and apoptosis [2]. MicroRNAs are transcribed from miRNA genes similar to other RNA molecules. Many hypotheses for the mechanism of origination and propagation of these miRNA genes have been formulated and investigated. These mechanisms have resulted in the formation of countless miRNAs that play a role in the evolution of various species . The purpose of this review is to highlight the relationship between the microevolution of miRNA and its macroevolutionary consequences.

A supported mechanism for the origin of miRNA is gene duplication events which form miRNA gene copies that evolutionarily diverge over time through nucleotide substitutions [4]. Gene duplication occurs when a portion of a chromosome is copied and inserted into another region of the genome. Among other mechanisms, duplications of a single gene can result from unequal crossing over during prophase 1 of meiosis. During unequal crossing over, one homologous chromosome receives a larger portion of its homolog than it donates. As a result, both alleles of the same gene can now exist on one of the homologs and can be inherited by offspring. Whole genome duplication events are another mechanism by which genes are duplicated; they are a consequence of non-disjunction in meiosis. Non-disjunction is the failure of chromosome separation during anaphase 1 or 2 of meiosis resulting in a diploid gamete that produce offspring with an additional copy of the entire genome. Following rounds of gene duplication, nucleotide substitutions result in the emergence of evolutionarily related miRNA gene families whose members are all derived from the same ancestral gene.  Out of the living deuterostome taxa, the vertebrates represented by humans (Homo sapiens) and lampreys (Petromyzon marinus) have a higher average number of miRNAs per family [4].  Vertebrates underwent a minimum of two rounds of full genome duplication from the time since the deuterostome common ancestor. The vertebrate zebrafish (Danio rerio) experienced an additional round of genome duplication which is suggested to account for a greater average number of miRNAs per family than seen in humans, lampreys, and the rest of the species representing deuterostome taxa. The positive correlation between the number of genome duplication events and the number of miRNAs per family supports the hypothesis that new miRNA genes originate from gene duplication events forming gene prologs that act as a pretext for evolutionary divergence and the emergence of miRNA gene families.

Miniature inverted-repeat transposable elements (MITEs) are palindromic sequences of DNA that are non-autonomously copied and inserted around the genome [3]. The palindromic nature of the MITE’s DNA sequence causes the single-stranded RNA product to have the first half of its strand complementary to its last half [1]. The three-dimensional result is a hairpin-like structure similar to that of the structure of the miRNA precursor pri-miRNA transcribed from other known miRNA genes. Through a poorly understood mechanism [3], MITEs can duplicate within a genome suggesting a potential mechanism for the existence of miRNA gene families evolved from an ancestral miRNA gene; ancestral miRNA genes being potentially synonymous to ancestral MITEs. These similarities, with the characteristics of MITEs, lead to the prediction that MITEs can transcribe RNA which are processed into mature miRNA by the same mechanism as known pri-miRNA. The prediction was supported by characterizing a family of human miRNA genes, called has-mir-548, which has genomic locations corresponding to a family of MITEs, called Made1.

Considering that miRNA regulates gene expression, it is logical to postulate that miRNA genes are subject to environmental selective pressures indirectly through the traits that they regulate. Certain miRNA genes are differentially expressed in various cell types such as miR-142 in lymphoid cells, miR-233 in myeloid cells, miR-1 in muscle cells, and miR-9 in neuronal cells in humans [5]. The miRNA expression across cell types is attributed to their role in cellular differentiation.MiRNA-aided cellular differentiation has fitness benefits to which one can attribute to the conservation and propagation of miRNA genes throughout evolutionary time.

Fitness can be thought of as a function of survival and reproduction [6]. When cells specialize they tend to inactivate unrequired genes through chromatin condensation decreasing access of transcription factors. Simultaneously, chromatin condensation – the tightened association of DNA and histone proteins – decreases access to mutagens. Consequently, cell and organismal survival and fitness increase throughout the evolution of cellular differentiation. The miRNA genes that aid in the regulation of cellular differentiation are correspondingly conserved.

Single microRNAs tend to regulate hundreds of mRNA [7]. In an experiment by Subramanyam et al., (2011) embryonic stem cell-specific cell cycle-regulating (ESCC) miRNAs hsa-miR-302 and hsa-miR-372 successfully downregulated multiple target genes involved in regulating the cell cycle, epithelial mesenchymal transition (EMT), epigenetic regulation and vesicular transport within fibroblast cells. The result was the de-differentiation of the cells into induced pluripotent stem cells. As shown, a small number of miRNAs can control multiple metabolic pathways in an organized way to achieve a desired cell fate. MiRNA’s breadth of regulation can impede the translation of hundreds of mRNA, an energy demanding process averted by the transcription of a few small, 21-nucletide long miRNAs [7]. The implications on energy conservation grants a rationale for the propagation of miRNA within a population. 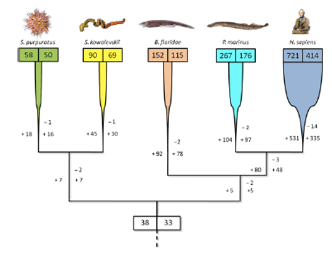 The microevolutionary event of miRNA gene origination and propagation have consequences on the macroevolution of the species in which they regulate gene expression in.  A change in the regulation of a gene or multiple genes may result in the multiple favourable changes in the phenotype of an individual. These phenotypic changes could accumulate and propagate potentially leading to the divergence of new species from a common ancestor; a macroevolutionary event due to the role of miRNA.  In a study by Campo-Paysaa et al. (2011) miRNA from five organisms representing five present-day taxa of the deuterostome superphylum were characterized. The miRNA genes were characterized as being unique to the taxon or evolutionarily conserved from the common ancestor of deuterostomes. The vast majority of characterized miRNA emerged independently in the five different taxa meaning major miRNA emergence events correspond to the major divergences of the deuterostome phylogenetic tree as depicted in Figure 1. These occurrences support the notion that the microevolution and propagation of miRNA genes has macroevolutionary consequences.

In conclusion, the origination of miRNA genes could be due to the duplication of MITEs or whole gene duplication events serving as a precursor for miRNA gene divergence. The emergence of novel miRNA genes can facilitate essential functions within eukaryotic organisms such as regulating cellular differentiation. Furthermore, the ability to halt unnecessary protein translation through miRNA-based gene-suppression has advantageous energy conservation effects contributing to miRNA gene propagation and conservation.  This emergence and conservation may have been implicated in shaping the deuterostome superphylum considering that major miRNA gene emergence events correlate with major divergences in the phylogeny. MiRNA expression is a dynamic mechanism of gene regulation. There are hundreds of identified miRNAs in humans and each are regulating hundreds of mRNA transcripts. Although miRNA research is relatively new and complex, researchers have already determined a lot regarding mechanisms of miRNA function, origination, and propagation. Considering the complexity of miRNA gene regulation, a lot is still unknown regarding the full effect miRNA has had on shaping present-day organisms.

I would like to acknowledge Prof. Patricia Gray in the Department of Biology at University of Western Ontario for providing instruction on how to complete a literary review. I would also like to acknowledge other coordinators responsible for the creation an implementation of Biology 2290: Scientific Method in Biology.