Spent Coffee Ground Biodiesel: a brief introduction to an alternative fuel source and its production

Although canola produces 90% lower greenhouse gas emissions than conventional diesel and is relatively cost-effective, the production of the canola plant raises environmental concerns. The U.N. Intergovernmental Panel on Climate Change estimates that 1% of the fertilizer used for canola crops forms nitrous oxide; this greenhouse gas is 298 times more potent than carbon dioxide in terms of the unit of weight. This is because the crop requires a significant amount of nitrogen fertilizer which reacts with microbes in the soil that cause nitrous dioxide to form [7].

Additionally, canola supply depends on harvest. The last few years’ supply has been much lower and prices have risen. Due to recent droughts, the crop had its smallest harvest in Canada in the last 13 years [8]. In Canada, canola is also primarily produced in the Prairies and therefore requires transportation.

Spent coffee ground biodiesel, an alternative and lesser-known biodiesel, can be created from spent coffee grounds. Every year, coffee grounds end up in landfills, producing methane, a harmful greenhouse gas (roughly 30 times more potent than carbon dioxide), as well as in the water supply, lakes and oceans, where the grounds stress marine life [4]. Thus, instead of using a canola oil petroleum diesel blend, the aim would be to use a spent coffee ground diesel blend that is environmentally friendly and requires no modifications of diesel engines. In addition to biodiesel, a second concurrent production (and revenue) stream from coffee grounds are biomass logs and pellets, which can be used to power furnaces, wood burning stoves and fireplaces. And a third, glycerol, which is a bi-product from biodiesel production. In contrast to canola oil, coffee grounds are in ample supply anywhere, and can easily be turned into both biodiesel oil and biomass logs and pellets.

Plant equipment cost is an estimated $3.6 million. Plant equipment includes: conveyors, extractor, pumps, rotary dryers, pelletizers, flash, oil/water decanters, fat splitters, reactors, and heaters. If any of this equipment already exists, costs would be lower. The raw materials cost (methanol and solvents) is calculated at less than $.50 per kilogram.

Other costs include employees, trucks, and plant location. By law, commercial waste must be collected and residential waste is collected by the municipal government. Additionally, spent coffee grounds would need to be collected from cafes, restaurants, institutions, hotels and homes.

Biodiesel production in a plant

Converting spent coffee to biodiesel requires extracting oils from the grounds. The grounds are combined with a 50:50 mix of isopropyl alcohol and hexane,which are both solvents; solvents are liquids typically used to dissolve or break apart other substances. The mixture of isopropyl alcohol and hexane separates out triglycerides and free fatty acids from the used coffee grounds (triglycerides and free fatty acids are the basis of the oil; oil is just fats at room temperature). 20% oil/gram from spent coffee grounds would be expected.

At this stage, there are two different production streams. In the first, the leftover grounds are sent to a dryer to remove water and solvent. The grounds are then compressed inside of a pelletizer into biomass logs and pellets. 40% biomass/gram of spent coffee grounds would be expected.

In the second stream, the mixture of oil, solvent and water is heated at 85°C, since research has shown that higher temperatures improve yield. This occurs in a flash vessel (a tank), and the solvent is turned into a gas, removed and can be reused. The oil and water is sent to a decanter to be separated, and then the oil is heated and sent to a fat splitter (a large cauldron) where it converts the triglycerides into free fatty acids. Triglycerides contain glycerol which is not needed and therefore removed. The free fatty acids are subsequently combined with methanol, a catalyst, to form biodiesel. A catalyst initiates a chemical reaction to occur faster or under different conditions. This process can be summarized as solvent extraction (where the oil is initially separated) and transesteriﬁcation (free fatty acid and alcohol react to produce biodiesel).

How I made biodiesel in the lab

I attempted to make my own spent coffee ground biodiesel. Below is a summary of my procedure and some of my lab notes across three trials.

I used 25 grams of spent coffee grounds and ground them down, since the larger the surface area to volume ratio the higher the yield. I combined the grounds with isopropyl alcohol and hexane, both of which are solvents, at a 50:50 ratio. This is known as solvent extraction or the initial separation of oil. I then weighed the samples and covered them with aluminum foil before gently pushing a thermometer through the foil. I heated the mixture at 85℃ on a hot plate. After approximately 2 hours, I poured the mixture through a paper filter into a separatory funnel and waited 20 minutes to allow for the glycerol to separate. I combined the remaining mixture with 4 mL of methanol, a weak acid catalyst. The reaction of free fatty acid and alcohol to produce biodiesel is called transesterification. Transesterification occurs when an ester reacts with an alcohol in the presence of an acid catalyst. The yield percentage can be calculated by using the initial and final mass.

During trial one, a stopper was used to prevent vapours from escaping the initial mixture. 12:57 minutes into the heating, the temperature suddenly dropped from 60℃ to 30℃. The increasing pressure in the beaker made the cap pop off and the thermometer crack. Because the thermometer was made from mercury, hydrargyrum balls went everywhere. This was cleaned with maximum safety precautions.

To prevent further issues in my second attempt, I used tin foil to allow minimum vapours to escape under a fume hood to minimize pressure. I also changed the thermometer to a red-dyed alcohol one. The mixture was heated for 1 hour and 30 minutes. The solvent did not fully dissolve in the solute, causing grounds to accumulate with the glycerol in the separatory funnel phase. This clogged the passage for the glycerol to escape. As a result, I had to remove the mixture to take out the undissolved coffee grounds, which consequently made me lose some of the mixture. I cleaned the funnel and ran the mixture in the glycerol again and it did not completely separate. I added the methanol to the mixture to form biodiesel; just after that, the glycerol separated. The results were not accurate and I was unable to calculate the yield percentage due to experimental errors.

I then conducted a third trial, during which I heated the mix of solvent and grounds for 2 hours and used a magnetic stir bar. I also used a paper strainer to prevent the leftover grounds from clogging the separatory funnel. This worked very well. My best yield was 42% as 32.146/79 mL/g = 42%. 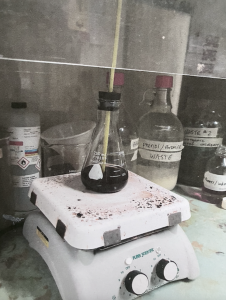 Spent coffee grounds could be a viable alternative fuel source as they are economically and environmentally stable. However, this source of biodiesel is still relatively new and underdeveloped. Further research and testing are required to figure out how to increase yield and efficiently produce this fuel source.