The Arrow of Time

Time is defined as “the continued sequence of existence and events that occurs in an apparently irreversible succession from the past, through the present, into the future” [1]. But what defines the sequence? And why does it flow forward?

Assuming that the following image is of gas particles in a box:

Looking at the picture, you can see that the images are ordered from left to right. From our life experiences, we know that it is likely to go from order to disorder.

The direction of time is referred to as the arrow of time. The idea was first explored by physicist and astronomer Sir Arthur Eddington in 1927. He said that the arrow of time applies everywhere, even to another alien species on the other side of the universe; that all physics concepts are symmetrical whenever and wherever they occur. 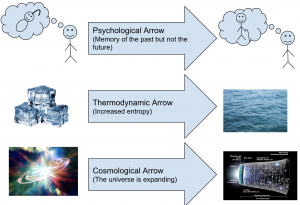 Psychological time has to do with human perception.

We can remember more than what we could in the previous moment. Additionally, we can remember what happened in the past or see some firm documentation of it. But even though we can accurately predict the future, we lack the knowledge to know what will truly happen. Essentially, the past has happened and it is irreversible and also accessible by memory or documentation. The future, however, is ahead and not fixed, no matter how predictable, there is no definitive proof of what will happen.

Thermodynamic or entropic time has to do with the laws of nature.

First, let’s define entropy as “a thermodynamic quantity representing the unavailability of a system’s thermal energy for conversion into mechanical work, often interpreted as the degree of disorder or randomness in the system” or a “lack of order or predictability; gradual decline into disorder ” [3].

Entropy is always increasing as no process in our universe is reversible. The second law of thermodynamics states that entropy always increases as a process moves forward in a closed system. So the direction, or arrow, of time points to greater entropy. Entropy tends to grow and everything moves toward equilibrium, so the entropy is greater when most homogenous. Equilibrium is the direction of time. The arrow starts at lower entropy and points to increased entropy, disorder and homogeneity.

We experience time as fixed. If you drop a glass and it shatters you cannot magically reverse time and piece the glass back together. If you have ice cubes and warm water then eventually there will be room temperature water. Entropy can be seen in how things such as energy and matter, have a tendency to disperse and grow towards randomness [4].

Note that thermodynamics is not time-symmetric but so fundamental to our universe that it is responsible for our perception of time’s direction.

Cosmological time states that the arrow of time points forward when the universe is in an inflationary state (the theory of exponential expansion of space in the early universe) and backwards when in a deflationary state.

We know that the universe is constantly expanding and galaxies are moving further apart. Logically, that means that before the universe was smaller and closer together, concentrated into the singularity which we call the Big Bang. As we are unconscious of this movement, it’s difficult to see how we perceive the universe’s expansion as an arrow of time. The constant expansion of the universe prevents the complete homogenization of our universe. Additionally, there are other possible scientific theories of the end of our time on the universe in the cosmological arrow:

The anthropic principle discussed by thinkers including Hawking, states that the physics laws were not designed to allow “intelligent” lifeforms like ourselves to find such a universe; we are only able to function solely because these laws allow it.

Hawking suggests that a thermodynamic arrow of time is essential for intelligent life to develop. We must consume food, energy, and convert it to heat – a disordered form of energy – to operate. This makes the thermodynamic arrow essential. If the laws of the universe were different, we may as well not be here.

It is not that the universe is in some way “designed” to allow human beings, merely that we only find ourselves in such a universe because it is as it is, even though the universe could easily have developed in a different way with different laws.

Do you have some burning questions? Or are you just curious? Watch these videos to learn more about the arrow of time!