The Implications of Synthetic Biology: A Brief Historical Reflection 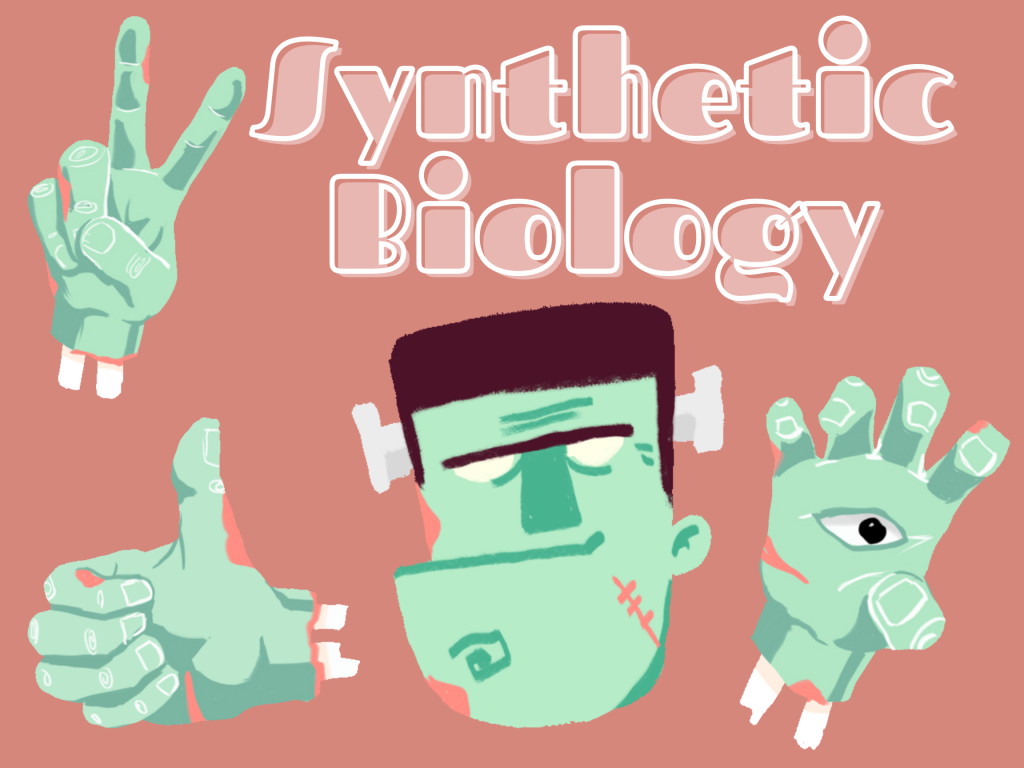 It’s alive!—the iconic shriek made by Dr. Frankenstein after creating human life in a lab—is by now universally recognized. Though Mary Shelley’s coup de maître Frankenstein; or, The Modern Prometheus (1818) and its 1931 film adaptation are clearly fictional, her basic story raises an essential scientific question: can life be artificially constructed from non-life?

During the 18th and 19th centuries, one prevailing belief about life was vitalism, which asserts that a ‘vital force’ or ‘spark of life’ differentiates the living from the inanimate. The opposing view, known as ‘mechanism,’ recognized that organic and inorganic compounds are subject to the same physical and chemical laws, implying that no fundamental difference exists between life and non-life, at a basal level. This doctrine was best summarized by Jacques Monod when he said, “There are living systems; (but) there is no living matter.” Mechanism also observes that living organisms are merely complicated rearrangements of inanimate matter, thus, the synthesis of life is a priori possible so long as matter is correctly arranged. This premise is simple but profound in its implications for the synthetic production of life, since it provides the answer to the essential question raised earlier. Despite Shelley’s fictionalized narrative, the basic idea of Frankenstein’s monster is therefore true; Non-living matter can be converted into life. It just takes more scientific rigor than the occultism of Shelley’s protagonist.

The first empirical blow to vitalism occurred just ten years after Shelley’s novel was published, when in 1828, the chemist Friedrich Wöhler first synthesized the organic compound urea from inorganic reactants. This caused many to question the validity of the vital force doctrine, since previously, urea was thought to be an exclusive product of living organisms. Vitalists underwent a second defeat after Hermann Kolbe synthesized acetic acid from carbon disulfide in 1845, the former being organic while the latter was inorganic.

The downfall of vitalism was followed by a series of scientific breakthroughs in the late 1850s and 1860s, constituting a period that may be defined here as the Biological Revolution—which is aptly named, since it happens to be sandwiched between the two Industrial Revolutions. Discoveries from this era include Rudolf Virchow’s doctrine that all cells must come from pre-existing cells (1858), Charles Darwin’s On the Origin of Species (1859), Louis Pasteur’s refutation of spontaneous generation (early 1860s), Gregor Mendel’s three principles of inheritance (1865-1866), Ernst Haeckel’s realization that the nucleus contains hereditary information (1865-1866), and Friedrich Miescher’s discovery that the nucleus contains nucleic acid (1871-1874). As life’s physical and chemical nature continued to be elucidated, vitalism became obsolete and the field of synthetic biology started to take root.

The Birth of Synthetic Biology

The rise of molecular biology in the early 20th century was a necessary precursor to synthetic biology. This period involved ‘taking apart life’ to analyze the structure and function of biological systems and their fundamental properties. These discoveries shape our understanding of how life is encoded, such as the structure of DNA or how our DNA transforms into functional products of life. The fundamental understanding of life that emerged from these discoveries and other accompanying findings is precisely what enabled subsequent ‘tinkering’ with life in the decades that followed. This provided the foundation for the birth of synthetic biology.

Many emphasize the role that François Jacob and Jacques Monod’s analysis of the lac operon (1961) played as one of the field’s first breakthroughs. The key concept was the circuit-like nature of gene expression, which explained how genetics and metabolism affect each other through a series of molecular levers and switches. For instance, bacteria exposed to lactose would express a different set of genes had they alternatively been exposed to glucose. This stems from the fact that the metabolism of lactose results in a specific product that physically interacts with the genes involved in lactose metabolism. Their basic notion of the circuit-like nature of genetic and metabolic regulation led to the idea that such fundamental circuits could be artificially created, and thus, life’s genetics and metabolism could be ‘edited.’

The Expansion of Molecular Biology

In 1972, just over a decade after Jacob and Monod’s breakthrough, Paul Berg famously showed that DNA from two different organisms could be ‘cut and rejoined’ to form what became known as ‘recombinant DNA.’ Berg’s work showed the apparent ease with which life’s ingredients could be tampered with, and even rearranged.

The 1970s and 1980s were fruitful decades for molecular biology. Apart from the birth and growth of recombinant DNA biology, this era saw the invention of chain-termination DNA sequencing by Frederick Sanger (1977), and Kary Mullis’s invention of the PCR (1985). Gene editing in the 1980s was quite new and in its early stages of development, so it was not until the mid-1990s when molecular biology entered its ‘systems’ phase, in which the myriad of complex interactions between genetics and metabolism were elucidated from a more integrative perspective. Also during this time, the early stages of whole-genome sequencing began with the publication of the first bacterial genome (1995), the first yeast genome (1996), and ultimately, the complete human genome sequence (2003). This allowed a more comprehensive understanding of gene expression within all types of organisms.

The Possibility of Artificial Life

With the improvement of recombinant DNA technology and whole-genome sequencing, the concept of synthesizing entire genomes, and thus entire organisms, became more plausible. Genomes are the basic molecular recipes of organisms—therefore, the synthesis of artificial genomes could lead to the synthesis of artificial organisms. Artificial organisms are not limited to bacteria, archaea and protists; in principle, they can include more complex eukaryotes, i.e., plants and animals. There is nothing that excludes the possibility of synthesizing human-made rabbits, fish, frogs, cows, monkeys, and more controversially, artificial humans or human-like entities. Such theoretical considerations would have profound moral and ethical implications and are worth extreme caution and consideration.

One might object to the previous arguments that such syntheses are too difficult to achieve; however, the history provides a more favourable narrative. Within the past two decades, the first synthetic viral genome was created, followed by the first synthetic bacterial genome (2008) and then the first complete yeast chromosome (2014). If synthetic bacterial and yeast genomes are possible, then so too are synthetic mammalian genomes—and the human genome is a mammalian genome. Therefore, the creation of ‘human-made humans,’ or at least ‘human-made human cells,’ is now a theoretical possibility. These considerations raise a multitude of complex social, political, philosophical, and moral questions, and are worth the utmost care and attentiveness.

The Origin of Life on Earth

When the synthesis of an entire artificial organism is finally achieved, it will have profound implications for medicine and technology. Additionally, such a discovery would provide tremendous insight on one of the great mysteries in science: the origin of life on Earth. Just as human ancestors practiced a rudimentary form of synthetic biology—insofar as Neolithic farmers experimented with selective breeding to produce new varieties of crops and livestock—so too did they speculate on this fundamental question. After all, the alternative name for Shelley’s protagonist who creates artificial life is ‘the Modern Prometheus,’ after Greek mythology’s god of fire Prometheus, who ‘made the first man from clay’; a motif found in many other creation myths, including popular narratives found in Abrahamic folklore. Contrary to the fables of ancient civilizations, it is now certain that the origin of life was not a single event, rather, it was the gradual outcome of a sustained evolutionary process that involved the slow transition from chemistry to biology.

There is now extensive and growing literature on the origin and early evolution of life. These findings provide plausible narratives for the events between the formation of Earth (4,500 Mya) and the first fossils of microorganisms (3,500 Mya). Synthetic biology plays an important role in certain components of this literature. Particular among which is the goal of synthesizing a ‘protocell,’ a more simple cell-like entity designed to resemble the origin and early evolution of life.

Though synthetic biology is only at its early stages of development, it has already exerted a considerable effect on 21st-century biology and is likely to continue down its meritorious path. Safeguarding its development is the responsibility of scientists and scientific institutions to provide the basis for a well-informed and well-educated public that elects competent politicians and policymakers. At this point during biology’s four-billion-year evolutionary history, life is now capable of manufacturing life. Such an achievement would have bewildered Mary Shelley, who would have been amazed to learn that humankind has become a Modern Prometheus.