The Jabulani: Why Footballs Can be Too Round 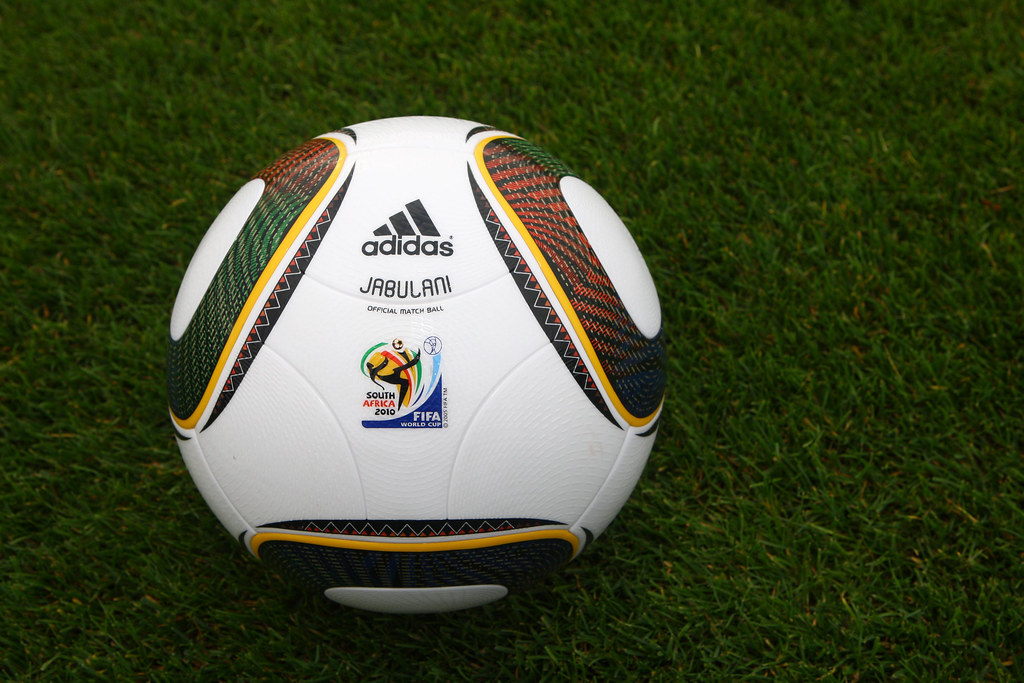 With the 2022 World Cup approaching fast, we are going to look at a past World Cup ball. While at first glance it may seem that footballs are completely spherical, they are actually not. In fact, balls can be too round. In the 2010 South Africa World Cup, the ball – the Jabulani – was almost perfectly round.

Before we get into the Jabulani, let’s look at an older football. Here is a picture of a 1950 football from application engineers at Phase Vision. They used an advanced 800 DBE scanner to graphically display sphericalness in a color-coded image of a ball. The technology is accurate to about a dozen microns and is normalized to a 6mm range in diameter. As you can see the ball is far from round [2]: 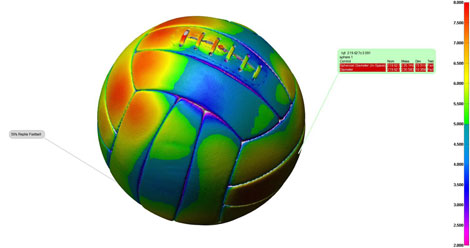 Here is the Jabulani ball, made about 60 years later, which is almost perfectly round:

The ball weighs 239 grams and has a circumference of 69 centimeters. The reduction panels were thermally bonded instead of traditionally stitched and the quantity was reduced from fourteen to eight, creating the roundest ball ever.

Players complained about the ball’s unstable and unpredictable trajectory and that it made the game unfair. They said it was too bouncy and they were constantly over hitting it. Also, it was extremely difficult to put spin on the ball. Goalkeepers argued that the ball seemed to slow midair like a balloon, making it difficult to predict the trajectory. Some goalies such as Iker Casillas, David James as well as Buffon and Julio Cesar voiced their opinions about the ball, comparing it to a beach ball and calling it “dreadful” [1].

The unpredictable swerving nature of the ball is due to the fact that the air density of the ball was lower, which meant less drag and lift. Additionally, the shape changes the time of contact with the foot consequently taking away the ability to put spin. In all, the ball travels a shorter distance, stops mid air and has a floating-unpredictable trajectory.

Adidas, Jabulani’s creator, defended their ball, calling it revolutionary with new “grip and groove” technologies advancing football. The idea being that the surface would allow for better control and grip on the ball, and that, due to its aerodynamic properties, the ball would have excellent stability in flight. Adidas said that the ball was the most “accurate” and “stable” ball that it had ever made [1].

Two studies were conducted after the World Cup to test the concerns. At Asai University in Tsukuba, wind-tunnel tests conducted by Kazuya Seo of Yamagata and Takeshi found that the perfect sphere ball had a tendency to slow suddenly mid-flight. An Australian scientist Derek Leinweber from Adelaide University, used a series of computer tests to conclude that a round ball goes faster and is more unpredictable than one with grooves [4].

NASA scientists at the Fluid Mechanics Laboratory at NASA’s Ames Research Center tested the Jabulani design and compared it to the performance of the 2006 world cup ball. Rabi Mehta, an aerospace engineer conducting the experiment, found that the ball tends to “knuckle under” or wobble at speeds of 45-50 miles per hour which is about the speed of a free-kick at goal. This is because when the round ball travels in the air without spin, the air around the surface is affected by the seams of the ball producing asymmetric flow. This asymmetry generates a side force that can suddenly push a ball in one direction, resulting in sudden swerves and swoops. Mehta also mentioned that the stadiums for the world cup are at a high altitude which can affect the aerodynamics of the ball, due to the lower air density. Thus the ball will fly faster as a result of less drag and swerve less due to the reduction in lift [6].

The “Jabulani effect” is actually due to turbulent flow. Turbulent flow occurs when a fluid undergoes irregular fluctuations, undergoing changes in magnitude and direction. This is in contrast to laminar flow where the fluid moves smoothly. Essentially, because the ball is perfectly round with many little grooves on the circumference, every time the wind catches it, the ball moves in that direction. Thus, the ball becomes unpredictable and it is difficult to predict its trajectory.

There is also reason that balls in other sports such as baseballs and golf balls have irregularities in shape. The seams and ridges are exposed to ensure a stable and controlled trajectory not interfered by wind and other conditions.