The Link Between Measles and Childhood Mortality

Among epidemiologists and clinicians, it was known that children who caught the measles virus had a higher likelihood of childhood morbidity and mortality. In fact, there is a strong likelihood to assume that at least half of childhood death pre-vaccination era was due to measles.

In recent years, new research has found biological evidence connecting measles to increased risk of mortality. In summary, measles can cause long term damage to the immune system. This damage is what researchers have coined immune system amnesia. After unvaccinated children contract the disease, it attacks the immune system, killing the reserves of antibodies in the system.

A pathogen (bacteria, virus, fungi -anything that you could classify as a disease) enters the body. This invading pathogen is referred to as an antigen. This means your immune system is unable to recognize this cell and considers it a threat.

As a result, your body starts to produce B cells. B cells are a type of white blood cell responsible for producing antibodies. Antibodies are proteins that bind themselves to the antigens, and their purpose is to be a signal for other white blood cells to destroy the antigen it’s attached to.

It is important to note that antibodies are specific to each antigen; the antibody your body produces for measles is different from the antibody for the flu. 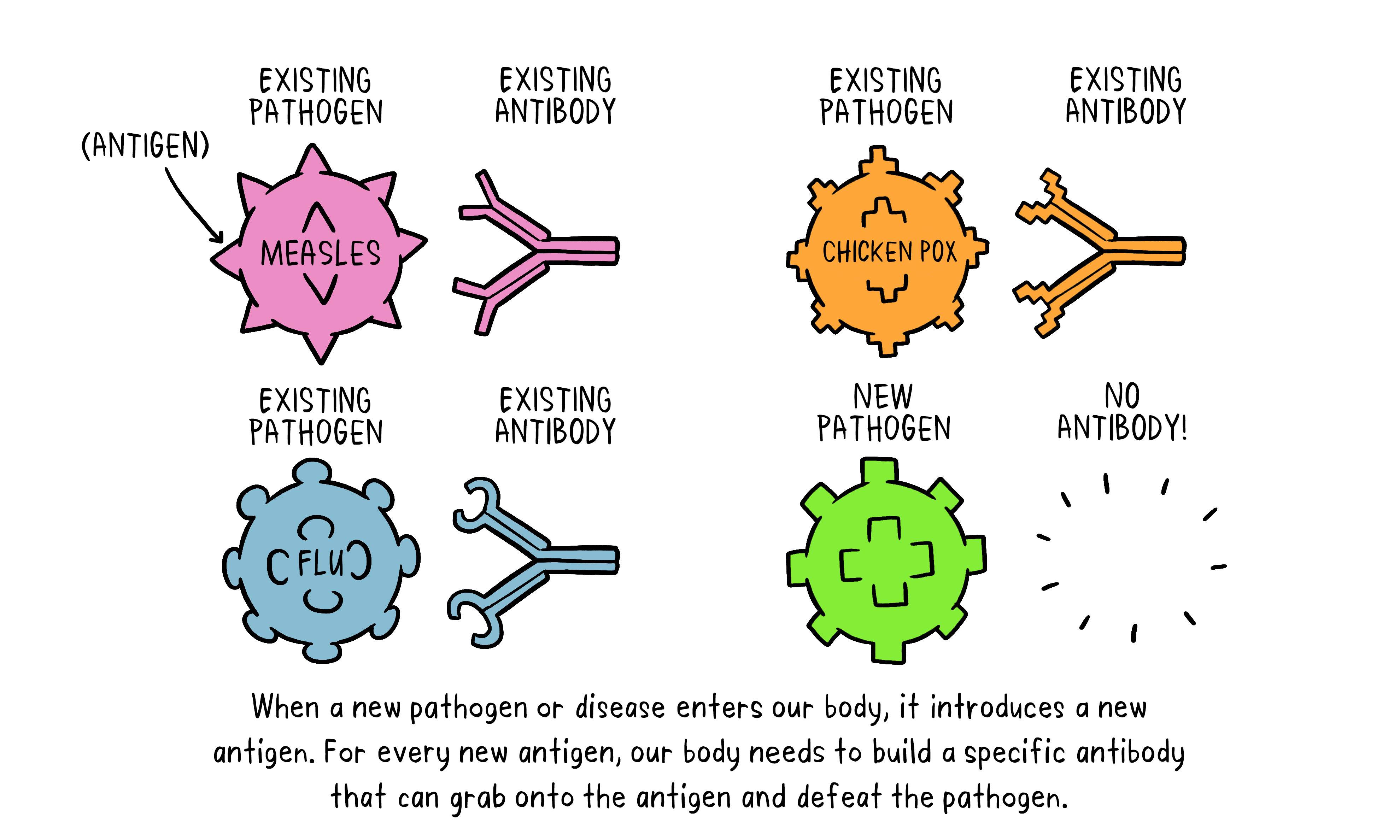 Measles is a viral disease, unique in that it can kill 11-73% of antibodies that are necessary to protect our bodies from other bacterial and viral infections. This leaves unvaccinated children at huge risk of contracting and dying from other diseases after contracting measles-  simply because their bodies do not have the signal  to destroy the present antigens.

Fortunately, measles is one of the most preventable viruses due to innovations in vaccination. According to the CDC a single dose has a 93% effectiveness rate, and both shots a 97% effectiveness rate. And we can observe the effects this life-saving vaccine had on the global community. Before the effort to widespread vaccination, 2.6 million people on average were dying from measles every year. However in the past 20 years, global health officials estimate that the vaccine has prevented 31.7 million deaths.

An Attack on Science

Some of these statistics are accredited due to the COVID-19 pandemic halting global rollout and campaigns for measles for vulnerable low-middle income countries. However, in countries like Italy and the UK, which have largely national and cheap healthcare services, the main cause for dropping vaccination rates are due to anti-vaccination campaigns and propaganda. The measles vaccine hesitancy is largely due to the work of Andrew Wakefield, a former physician and academic, and a strong anti-vaccine activist. In 1998, a team of researchers, headed by Andrew Wakefield, produced a study in the journal, the Lancet. Wakefield produced the hypothesis that the MMR vaccine was causing bowel inflammation (which he claimed released harmful proteins into the bloodstream), resulting in regressive autism. Although his study was retracted and debunked over a decade ago, anti-vaccine demonstrations and groups have large followings and considerable influence over the global community.

Many parents who take a stance against vaccination are sincere in protecting and giving their children the best health. However, it would be false to simply stay silent due to the increasing trends of unvaccinated children. Vaccine hesitancy kills children, and it is imperative to disseminate scientific knowledge to the masses so that we can reverse the decreasing vaccination trends.

Naima is a grade 11 student at Northview Heights Secondary School in Toronto. A budding polymath, she is interested in a broad range of subjects such as history, ecology, creative writing and the hard sciences. Her passion for knowledge bloomed as a child when she began reading anything she could get her grubby little hands on. She aspires to become an author and shares what she loves with others who have similar interests.