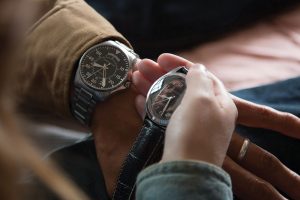 Have you seen the movie Interstellar? Or Lost in Space? Well, then you know that the rate of time is relative. This media portrayed science is actually based on a real concept: time dilation.

Time dilation is the slowing of time as perceived by one observer compared with another, depending on their relative motion or positions in a gravitational field. It’s a consequence of Einsteinian relativity, in which time is not as absolute as it might appear; the rate at which it passes is different for observers in different frames of reference.

Universal Laws of Gravitation and Relativity

As one of his many theories, Galileo suggested that one cannot tell if they are moving if it is at a constant rate. If you are on a ship traveling at a constant speed smoothly it is impossible, without looking outside, to tell that you are moving as gravity will behave the same way. This is because all principles of our universe are synonymous and true whenever and wherever they occur. That’s why we don’t feel dizzy because the Earth is constantly spinning around the sun. This is the core idea behind relativity. 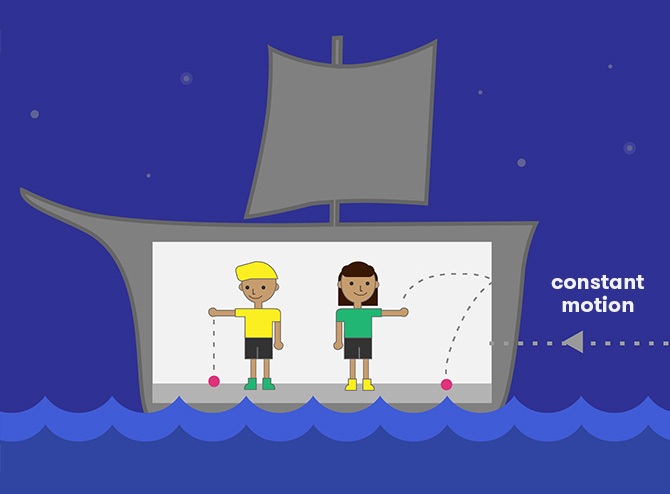 Newton’s universal law of gravitation explains orbits. If you throw an object from Earth too shallow, then it will fall back. If one throws it too hard, it will zoom off into space. If the object is thrown just right then it will be caught in orbit between gravity and its momentum. 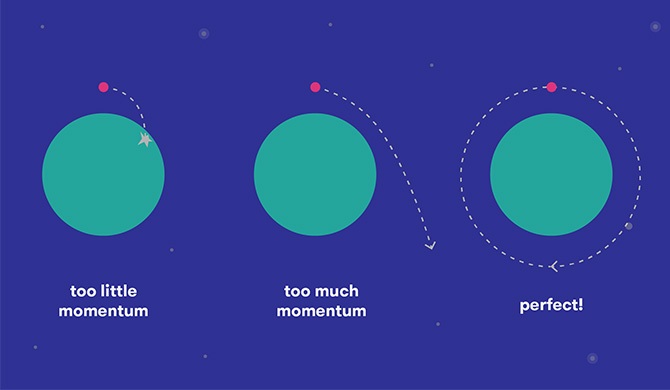 This was the basic theory that Einstein built upon to create his theory of special relativity.

In his theory of special relativity, Einstein took relativity into the context of the speed of light. Essentially, he explained how speed affects mass, time and space; or, in other words, how the speed of light can define the relationship between energy and matter, as small amounts of mass (m) can be interchangeable with enormous amounts of energy (E). Thus, he created the famous equation:  E = mc^2.

This was mostly used when discussing the “special cases” of huge energies, ultra-fast speeds and astronomical distances, all without the complications of gravity. As an object approaches the speed of light, the object’s mass becomes infinite and so does the energy required to move it – cosmic speed limit. However the simultaneity is not absolute as time moves differently for objects in motion than for objects at rest. Energy (E) and mass (m) are interchangeable. They are, in fact, just different forms of the same thing. One of the many implications of Einstein’s special relativity work is that time moves relative to the observer.

To illustrate, let’s use an example of a train.

There are two people; one on a train and one standing by the tracks. The train is between two trees on either end. The two trees get struck by lightning at the same time. The person on the train witnesses the lighting at two different times due to his movement and frame of reference, whereas the observer by the tracks sees the lightning simultaneously. Einstein implies that simultaneity is not absolute and time is relative to the observer and moves differently for objects in motion than those at rest.

General relativity is an extension of special relativity to include gravity. Gravity is the curvature and warping of spacetime, caused by massive bodies and can determine the path objects (i.e. light). It is dynamic and can move as the large masses do. It predicts everything from the orbits of stars to the collision of asteroids, to apples falling from a branch to the Earth. We use general relativity to get gravity-boots around the solar system for planetary probes. Gravity causes time dilation. The closer you are to a large mass the slower time goes. 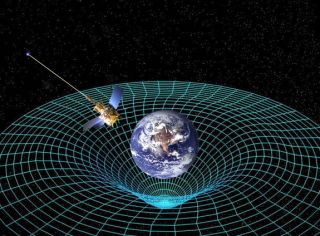 In the twin paradox, one identical twin remains on Earth, while the other takes a trip to a distant star at velocities nearing the speed of light. When they meet up again, the traveling twin is significantly younger than the one who stayed at home. Surprisingly this paradox is actually not paradoxical because the movement is asymmetrical – the traveling twin must accelerate, turn around and decelerate at some point in the voyage and this brings in general relativity making that twin age less.

Imagine a light clock (between two mirrors the light bounces up and down and the time it takes from one to the other is one tick). One is on earth, one is on a spaceship, and both clocks seem to be working normally. However, the person on earth sees the spaceship differently: the light is moving both up and down and to the side, uniform with the ship. So for the space traveler, light travels at 300,000,000 m/s but only has to travel up and down. To the Earthbound observer, light travels at 300,000,000 m/s, but must travel a longer, diagonal distance. Then, for the Earthbound observer, the spacecraft clock takes longer to “tick”. This effect is called time dilation. The faster you travel through space, the slower you travel through time. This is another way of saying you can never travel faster than the speed of light as the clock would stop altogether. 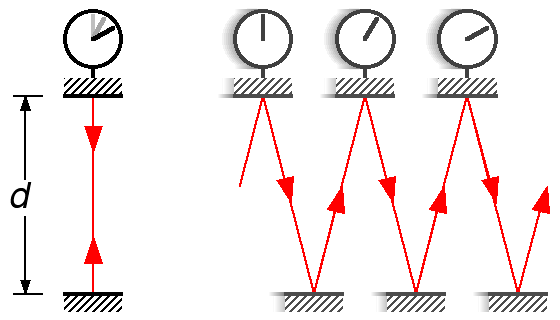 So whose time is slower?

Both viewpoints are valid so long as they are both in constant motion. The spaceship would accelerate when launching and decelerate when landing so this changes the frame of reference and breaks the symmetry of the situation. The astronaut would truly be younger on return. 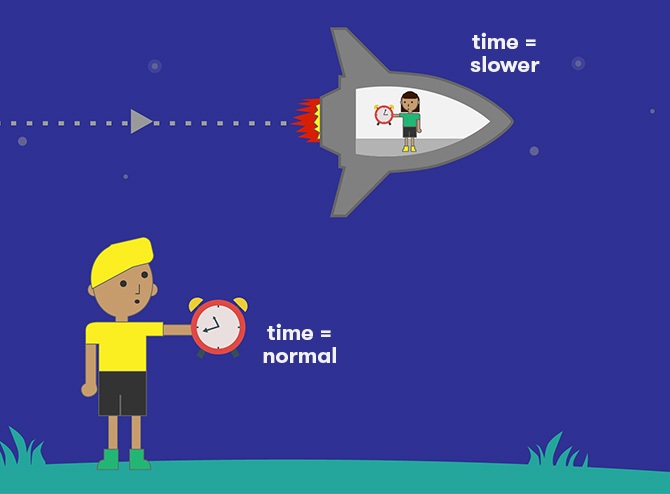 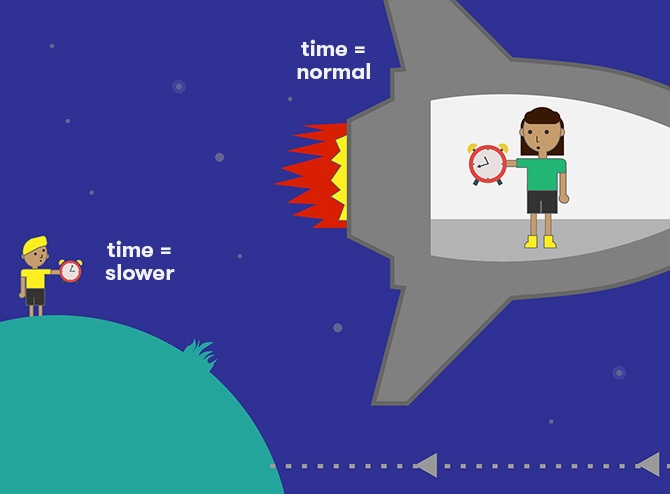 As well, moving objects contract in space, but there are no lingering effects like there are for time dilation. This is another expression of the light-speed barrier: if we reached light speed, we’d shrink to zero length.

The effects of gravity and acceleration are indistinguishable. This is known as the equivalence principle. Gravity is measured in units of acceleration. Large masses can also cause time dilation, the closer you get the slower time moves. NASA hypothesized that a clock put in orbit 10km from a black hole, having the same mass as the sun, would take around an hour and 10 minutes to show a difference of 1 hour.

Time dilation is particularly relevant to spacecrafts because of their high speeds and changing gravitational fields. For example, the Voyager 1 is approximately 1.2 seconds younger than it would be if it remained on earth. Additionally, GPS satellites have to account for 38 microseconds (millionths of a second) per day of time dilation (45 microseconds from gravitational time dilation plus 7 microseconds from the speed-related effect totalling 53 ms). This information was confirmed by muons (short-lived elementary particles ) that travel near the speed of light and are created when cosmic rays hit Earth’s upper atmosphere. They are very unstable and should not survive to get to the Earth’s surface however many do, because time dilation can expand their life by a factor of 5.

If two very massive objects (i.e. black holes) collided, they could potentially create an extreme disturbance in the fabric of spacetime, moving outwards like ripples in a pond. This was initially theorized by Einstein, but he believed that the ripples would be undetectable by the time they reach Earth. On February 11th of 2017 Laser Interferometer Gravitational-Wave Observatory (LIGO) equipment detected a gravitational wave, proving his theory correct.

The LIGO experiment consists of a laser directed into a large tunnel structure. The beam is split so that each half of the laser simultaneously travels down a different 4-kilometer-long ‘arm’ in perpendicular directions. A mirror reflects the light from the laser back to where it came from, and the two beams merge back into one. The laser beams should recombine at exactly the same time. If a gravitational wave comes rippling through space while the detectors are switched on, that ripple will stretch one arm of the L-shaped structure before stretching the other therefore making the lasers reconvene at different times. The gravitational wave distorts the passage of the light, resulting in a particular kind of interference light pattern detected at the end. The discovery of gravitational waves gives astronomers a new ‘sense’ with which to explore the universe. This technique will allow us to better understand the most massive objects in the universe such as black holes, neutron stars and supernovae; and it will provide us with a new window to study how the universe formed. 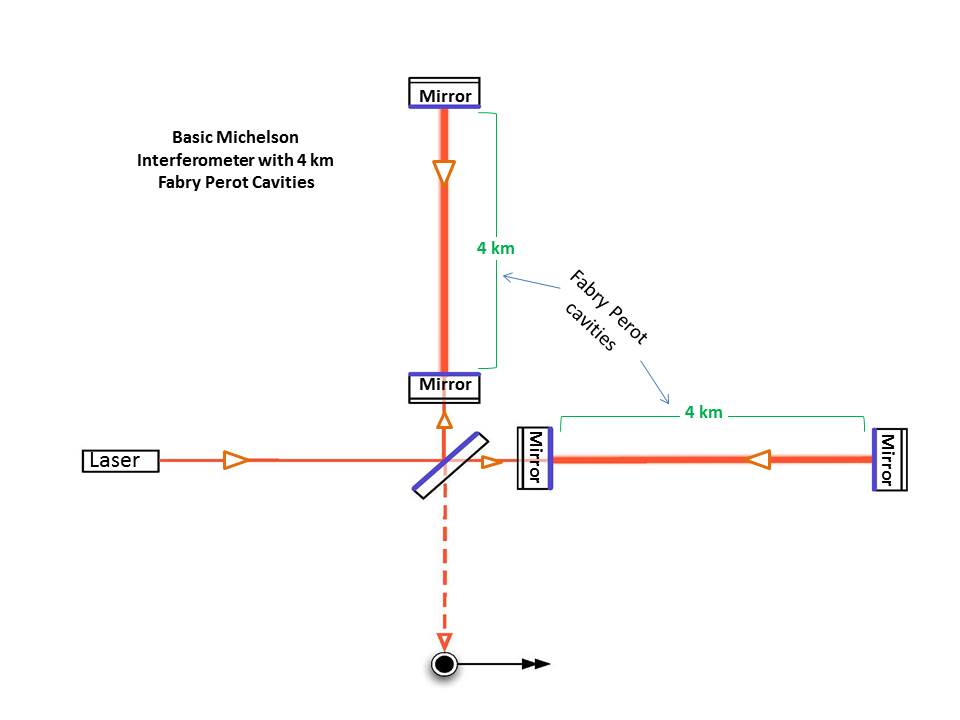 Time dilation is experienced by everything in the universe at a subatomic level. In fact, your head is actually older than your feet. While time may seem fixed or absolute to us experiencing it, time is actually relative.